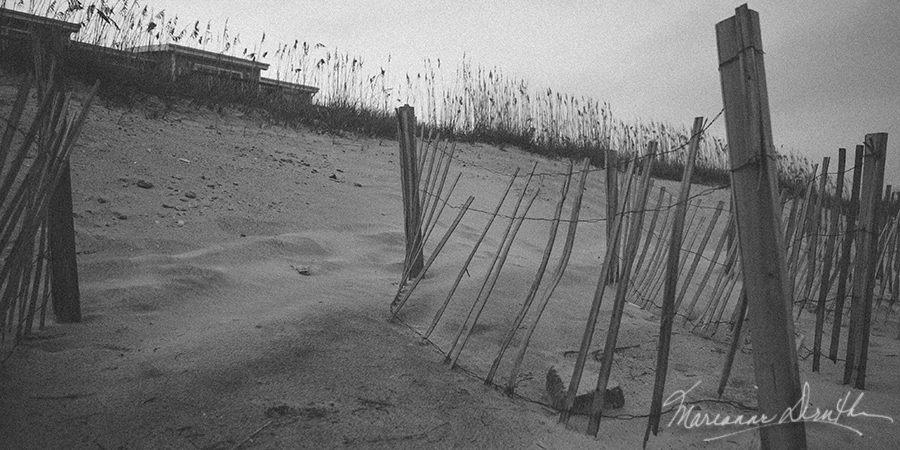 These fences are meant to stabilize, not to keep out critters (human or other mammals), not to divide (that line of “Good fences make good neighbors” comes to mind).

Humans, feeling, thinking, breathing humans build fences around themselves all the time.  Sometimes building a fence is in reaction to fear, to hurts and most often to protect ones’ self.  I believe this to be a fundamental truth about human nature.

Sometimes we take time to mend our fences as well.  Repairing our own fences, these barriers to the outside, is tough.  Repair work entails exposing yourself to the outside world, in order to fully repair a fence you literally have to step outside of it (step outside of yourself), face the outside and turn your back to it (with all the potential for more hurt while you least want it, when your guard is down).   Erecting a fence, sturdy, one that doesn’t allow outsiders to get through, that’s the easy part.  Mending the fence, repairing yourself by confronting those hurts that have gotten through your fence…wow, that’s tough and hard work for sure.

Examining the hurts that got through, trying to figure out how to wrap ones’ self around the hurt and live through it without completely blocking it out…THAT’S the tough part.  That’s where the work is.

I propose that maybe instead of looking at fences as a way to keep things (emotions, pain, hurts) out maybe construction of our fences should be more in line with the kind of fences that support & stabilize.  Much like the kind that stabilize dunes.  Maybe the structures we build emotionally shouldn’t be the kind that shut out but selectively let in so that we could experience life and add to the experiences rather than avoid them completely.

…eh, Monday morning ramblings.  What do I know.  I’m just fumbling through this life like everybody else.