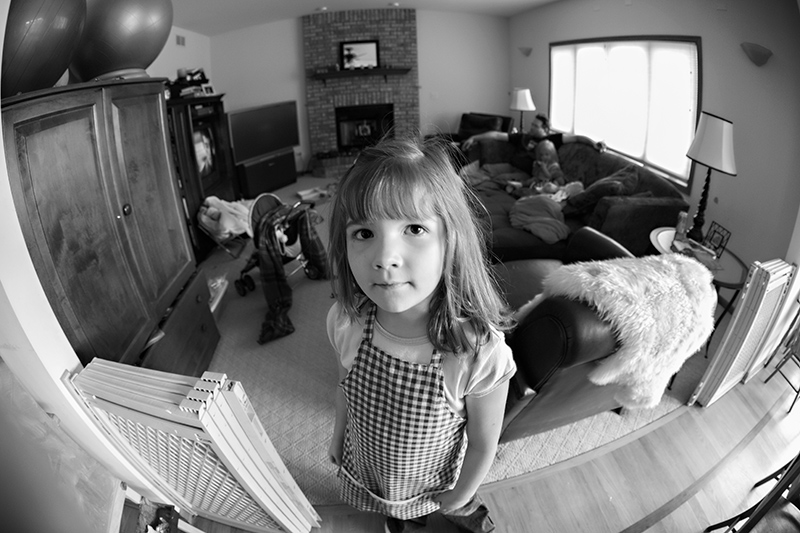 Barriers, balls, messes: my life up until 2006 (when this was captured) summed up in three succinct words.

Barriers: that gate behind my M Girl, separated wandering toddlers from the day to day life of our kitchen.

Balls: kids’ balls, exercise balls, toy balls for the dogs.  Honestly what is childhood without balls and what is core strength without an exercise ball?

As for messes: no descriptor needed.

As the early days of my business ramped up, my focus less on home and neatness, the messes of our lives sort of took over as I began my search for THE image.  Every client session was dedicated to my seeking THE image, the one image that spoke to the heart of who I was at the time, at the heart of my pained soul.  My life’s tragedy refocused into photography for healing.  I became obsessed with THE image.  And the more I sought it out the bigger the barriers became, figurative and not literal.  The more distance grew between myself and those three pictured in the photo.  The barriers were real AND imagined.

The balls were just real.

And the messes both real and imagined.  As I delved into healing my soul the chasm between myself and those I cherished most grew.  I was on the hunt for THE image and those I loved stood helplessly beside me wishing to be seen.  I was seeking on the behalf of others’ what I so desperately needed to see for myself.

There’s some melodrama in the memory of it all I think.  I don’t think the lines were drawn so clearly as we lived through it (muddled is the more operative term really).  But there they were.

In the aftermath of that extraordinarily busy time in my world I sometimes I wonder if I would want to jump in a time machine and go back to re-live this time; immerse into my own experiences once again during this era, a mix of discovery, overcoming personal pain (and the tragic moments surrounding me) – these early days of being (a hurt and flawed) human being, a (struggling and imperfect) wife, a (fledgling, eager and willing to learn) business owner and a (scatterbrained, unorganized, perfection seeking) mom to two amazing daughters who confounded, frustrated and enchanted me all at once.  The quick answer is yes but the thought out long answer is no.  In the search for THE image I lost a big part of myself (which still seeks THE image to this day except this version is far more controlled and less unruly!!).  The current version of myself knows that pain doesn’t go away, it just gets shoved back to the recesses of the corner of my brain and sort of infused with some numbing potion that only time can bring, facing it head on and not hiding away behind the camera has been the biggest lesson learned.